Archives For US Navy

Eric Jay Dolin, whose previous work includes Leviathan and When America Met China, has generated yet another meticulously researched and well narrated piece of nautical history. Focusing on America’s lighthouses from inception to the current day, Brilliant Beacons is a sweeping, majestic piece that encompasses technology, material culture, engineering, personal histories and the strategic role lighthouses have played in America’s development and growth over the last three plus centuries.

Writing with the passion of someone who has long had a love affair with the sea and her incredible stories, Dolin draws the reader in with the origins of American lighthouse design and tirelessly waltzes through topics that lesser authors would render dry and boring. This is the second of Dolin’s books reviewed on this site and both have held particular meaning for me. The first being When America Met China, which, for someone who majored in Chinese language at America’s ninth oldest university, was of particular interest and is a phenomenal read. Having grown up in North Carolina, I have always had an affinity for lighthouses, especially given that I was a young teenager when the iconic Cape Hatteras light house was moved 1,500 feet to save it from being engulfed by the ravaging waves of the Atlantic. Thus, the subject of Brilliant Beacons more than intrigued me and, while I didn’t have the opportunity to read it at the beach, I read the first 25% from my home overlooking the Port of Tampa and the remaining 75% on a round-trip flight to New York City, a city forever linked with the sea.

Overall, Dolin’s narrative style enables the reader to make quick work of the book’s 400 plus pages. Saying Brilliant Beacons is the perfect beach read might sound a little cliche, however, the book is both illuminating and entertaining and the timing of its release at the height of the summer months could not have been better planned. Pick up Dolin’s latest and read away, you will be glad you did.

On the night of October 17, 1863, the sleepy town of Tampa was awakened by the blast of Union gunboats firing on Fort Brooke at the town’s edge. The Union gunboats had been in from their blockading stations offshore to create a diversion for the landing of a 100 man Yankee raiding party. Lying at anchor six miles up the Hillsborough River were the targets of the raiding party: a barge and two Confederate blockade runners, the schooner Kate Dale and the steamer Scottish Chief. The ships had braved the Union blockade multiple times to sail between Cuba and Tampa – exchanging cotton and cattle hides for arms, munitions, and Cuban cigars and wine. The raiding party made their way up the riverbank and set fire to the three vessels, ending their blockade running careers in a ball of flames. The Kate Dale and the barge sank at anchor while the Scottish Chief sustained serious damage but did not sink. The ship was later towed down the river where its machinery was salvaged and the hulk left to sink into the river.

A Confederate response force, having been alerted to the presence of the Yankee raiding party, pursued the Union soldiers to Ballast Point near the terminus of Old Tampa Bay. At Ballast Point, now a popular pier at the end of Bayshore Boulevard, a quick skirmish ensued. Three Yankees and twelve Confederates lost their lives before the Yankee raiding party was able to embark and escape harm’s way. In September 2008, nearly 145 years after the raid, marine archaeologists announced the discovery of the wreckage of the Kate Dale in the Hillsborough River. A year later, the Scottish Chief was discovered further down the river where she had been left to rot after having her machinery stripped.

On September 15, 1942, a powerful task force of US naval vessels steamed towards Guadalcanal Island in the South Pacific. Consisting of the aircraft carriers USS Wasp and Hornet, the battleship USS North Carolina and ten other vessels, the task force intended to land a regiment of US Marines on Guadalcanal to reinforce the US troops already vying for control of the island. As mid-afternoon approached, a Japanese submarine, I-19, maneuvered within firing range of the squadron and loosed a volley of six torpedoes at the Wasp. Despite attempting to outmaneuver them, three of the torpedoes slammed into the Wasp while a fourth missed and struck the North Carolina. A mighty conflagration quickly ensued as the torpedoes had detonated close to the ship’s fuel stores and magazines. Damage control efforts and maneuvering into the wind proved fruitless and within 35 minutes of the torpedo strikes, the order for abandon ship was given. When the Wasp finally slipped beneath the Pacific Ocean’s waves, 193 souls followed her leaving approximately 1900 survivors with 366 of them wounded.

Unfortunately for the Wasp and her crew, the Wasp had been built on the tail end of the limitations of the Washington Naval Treaty of 1922. As a result, the ship had minimal armor and suffered from a poor design for ammunition and gasoline storage in order to fit the ship into the tonnage restrictions left to the US Navy under the treaty. Sadly, the US Navy lost 193 good men, 45 aircraft and a valuable ship to the good intentions of a treaty designed to prevent conflict – a treaty which proved to do nothing but force allied naval forces to fight with one hand behind their back for the first years of World War Two.

Today marks the 28th anniversary of the sinking of the Peruvian Navy submarine Pacocha which was lost off the Peruvian port of Callao near Lima. Running on the surface on the night of August 26th, 1988, the Pacocha was accidentally rammed by a Japanese fishing trawler. Mistaking the conning tower of the sub for a small craft and thinking the two craft would pass one another harmlessly, the trawler’s crew did not take evasive action and the trawler struck the sub’s hull. The Pacocha‘s captain, Captain Daniel Nieva and six crew members were killed immediately while twenty-two sailors were able to successfully abandon ship. The United States immediately dispatched an underwater rescue team, however, the Peruvians quickly deployed a diving bell and, within 24 hours, gained access to the sub’s trapped crew through one of the Pacocha‘s hatches. The remaining twenty-three crew were safely brought to the surface, escaping an excruciating death of painful asphyxiation from chloride gas or drowning as the sub’s remaining compartments slowly filled with water.

Ironically, prior to its service in  the Peruvian Navy, the Pachoca had been the USS Atule, a Balao/Guppy class diesel submarine whose sole kill during World War II was a Japanese merchant vessel, the Asama Maru. Later, the sub torpedoed and sank the former Kriegsmarine U-boat U-977 during naval exercises in 1946. After thirty years of service in the US Navy, the sub was sold to Peru where she was named after a 19th century Peruvian naval battle. Following the rescue of her crew, the sub was later salvaged and scrapped.

As her sister ship USS Saratoga slowly makes her way to the scrap heap, USS Ranger (CV-61) sadly awaits the same fate. Launched in 1957, the Ranger was one of four new Forrestal-class super-carriers and the seventh US Navy warship to bear the name Ranger. Like an earlier USS Ranger (CV-4) which had been the first American aircraft carrier designed from the keel-up as an aircraft carrier, the Ranger was the first American carrier to be designed from the keel-up as an angled deck carrier.

During her nearly forty years in active service, the Ranger supported bombing sorties in North Vietnam, responded to unrest in Kenya/Uganda, deployed to the Middle East for Operation Desert Shield/Storm. On her final deployments, the Ranger assisted humanitarian efforts in Somalia as part of Operation Restore Hope, enforced the No-Fly Zone in Southern Iraq and launched a B-25 bomber in commemoration of Jimmy Doolittle’s 1942 raid on Japan. While never being actively attacked, the Ranger’s crew suffered at least 7 deaths during her service to accidents onboard.

In addition to serving on the frontlines, Ranger also served as a floating movie set for such notable movies and television shows as Baa Baa Black Sheep, Flight of the Intruder and Top Gun. While decommissioned in 1993, the ship remained part of the US Navy’s inactive reserve fleet. Despite a proposal in 2010 to convert the vessel into a museum ship, today the Ranger is slated for the scrap heap. A dedicated group of veterans and fans have recently stepped up in an effort to save the ship and breathe life back in to the museum ship proposal. Their petition can be found here on change.org. 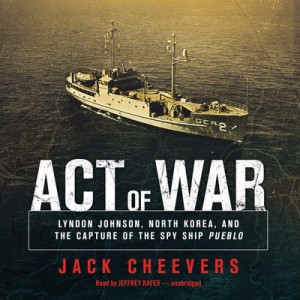 The events surrounding the capture of the USS Pueblo, a US Navy spy ship, rank among the most ignominious in the storied history of the United States Navy. Jack Cheevers’ book Act of War

Cheevers devotes special attention to the captain of the Pueblo Commander Lloyd Bucher, his background, the agonizing decisions he had to make while under fire and his subsequent pariah status within the US Navy. One of the strongest aspects of the book is how the reader is presented with the facts of the capture of the Pueblo and allowed to decide on his or her own where the blame should lie for the capture of the Pueblo and whether more should have been done to prevent her capture. While not a light beach read, Act of War

is an enlightening tome worthy of one’s time, especially given the continued saber rattling by an increasingly unhinged North Korean regime.

The “sinking” of the US Navy’s Flying Aircraft Carrier 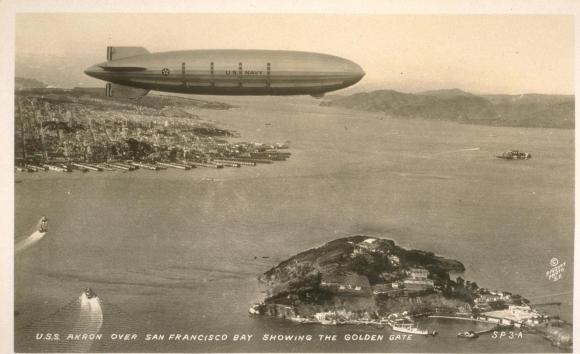 Much like dalliances with submarine aircraft carriers in the 1920s and ’30s, the US Navy also experimented with flying aircraft carriers. Perhaps this is where Marvel Comic’s writers got their inspiration for S.H.I.E.L.D’s helicarrier.  Launched in the early 1930s, the USS Akron and the USS Macon were among the largest dirigible airships in the world. Powered by eight 560 hp engines, the airships could reach speeds up to 83mph and had a range of 12,180 miles, Such range gave the airships the potential ability to act as the eyes of the US Navy’s battle fleets as well as assist in search and recovery missions. Both the Akron and the Macon were also designed with the ability to carry, launch and recover biplane fighter and reconnaissance planes. Thus they became the US Navy’s first flying aircraft carriers. 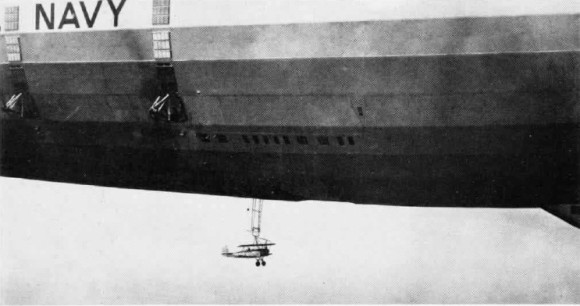 Unfortunately for proponents of dirigibles as well as flying aircraft carriers both the Akron and Macon were accident prone, much of it from the relatively new design of the airships and the inexperience of the crews operating them. Just past midnight on the morning of April 4, 1933 the Akron was caught in stormy weather off the New Jersey coast. A combination of updrafts followed by sharp downdrafts resulted in collision between the sea and the dirigible’s lower fin. The airship quickly became uncontrollable and crashed into the stormy Atlantic. Sadly 73 of the 76 officers and crew aboard were lost before, in an eerie reversal of events at Lakehurst, NJ just a few years in the future, a German merchant vessel was able to quickly arrive on scene and rescue survivors.

The US Navy and Coast Guard dispatched multiple vessels to hunt for survivors, but one of the rescue vessels, the blimp J-3, was herself lost with the death of two men. A subsequent investigation resulted in the Macon being equipped with additional life preservers and rafts which were put to good use two years later when Macon crashed into the Pacific Ocean off the California coast with the loss of only two men. 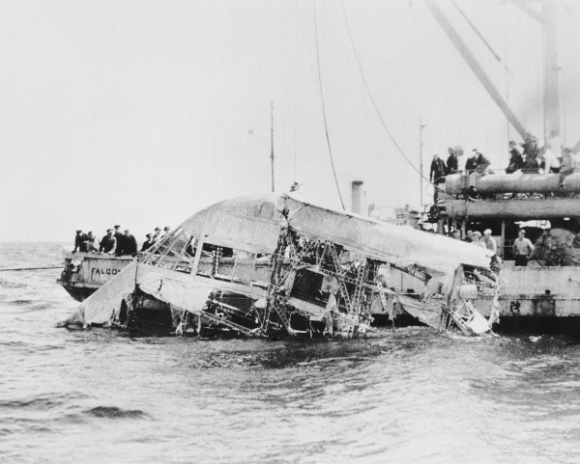 Error: Twitter did not respond. Please wait a few minutes and refresh this page.

Shipwreckology
Create a free website or blog at WordPress.com.