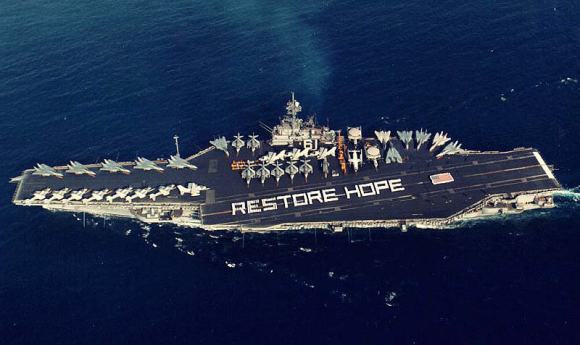 As her sister ship USS Saratoga slowly makes her way to the scrap heap, USS Ranger (CV-61) sadly awaits the same fate. Launched in 1957, the Ranger was one of four new Forrestal-class super-carriers and the seventh US Navy warship to bear the name Ranger. Like an earlier USS Ranger (CV-4) which had been the first American aircraft carrier designed from the keel-up as an aircraft carrier, the Ranger was the first American carrier to be designed from the keel-up as an angled deck carrier.

During her nearly forty years in active service, the Ranger supported bombing sorties in North Vietnam, responded to unrest in Kenya/Uganda, deployed to the Middle East for Operation Desert Shield/Storm. On her final deployments, the Ranger assisted humanitarian efforts in Somalia as part of Operation Restore Hope, enforced the No-Fly Zone in Southern Iraq and launched a B-25 bomber in commemoration of Jimmy Doolittle’s 1942 raid on Japan. While never being actively attacked, the Ranger’s crew suffered at least 7 deaths during her service to accidents onboard.

In addition to serving on the frontlines, Ranger also served as a floating movie set for such notable movies and television shows as Baa Baa Black Sheep, Flight of the Intruder and Top Gun. While decommissioned in 1993, the ship remained part of the US Navy’s inactive reserve fleet. Despite a proposal in 2010 to convert the vessel into a museum ship, today the Ranger is slated for the scrap heap. A dedicated group of veterans and fans have recently stepped up in an effort to save the ship and breathe life back in to the museum ship proposal. Their petition can be found here on change.org.