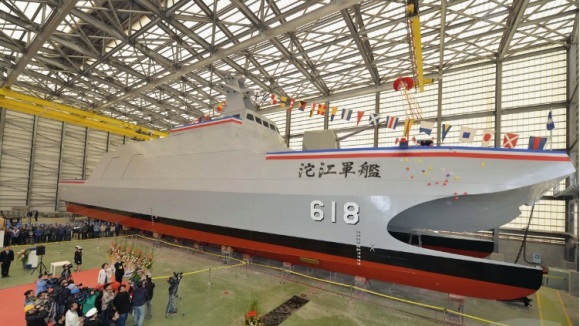 Late last week the Republic of China launched the first of a new class of stealth missile corvettes. Christened Tuo Jiang, the vessel is designed to operate with a low radar signature and is aimed at countering the threat of the People’s Republic of China’s growing aircraft carrier capability. The Tuo Jiang’s armament has not been fully publicized, however, Taiwanese news sources are reporting that it will be outfitted with a battery of Siung Feng III (HF-3) ramjet-powered supersonic anti-ship missiles. Combined with the stealth of the Tuo Jiang, the missiles give Taiwan’s navy a formidable indigenous option to discouraging and/or defeating an attack by the People’s Republic.

Despite the United States’ “Asia Pivot,” the new US policy of “leading from behind” has justifiably worried Taiwan and other Pacific nations. As such, Japan, Taiwan, South Korea and the Philippines are prescient to increase their indigenous options to defending their sovereignty in the face of an increasingly belligerent People’s Republic of China. With reports of hesitation in the Chinese economy, saber rattling in the Diaoyus/Spratlys/Senkakus/South China Sea will most likely increase much like Argentina and the Falklands in the ’80s and more recently under Christina Kirchner. If the People’s Republic’s saber rattling ever becomes more than mere noise, then the stealth missile corvettes of the Tuo Jiang class will allow Taiwan’s navy to punch above its weight class much like Israel’s missile boats

did in the Yom Kippur War.