Robert Kurson is back again with another story of adventure, exploration and humanity with Pirate Hunters

. In Pirate Hunters, John Chatterton, one of the main characters of Kurson’s previous book Shadow Divers

, embarks on an expedition to locate and salvage the wreck of the Golden Fleece, a pirate ship lost in the 1600s off the coast of the Dominican Republic. Kurson blends the story of 17th century Captain Joseph Bannister, 21st century divers John Chatterton and John Mattera and the zany world of shipwreck hunters to create an exciting and engaging read. The book swiftly transports the reader from the shores of the present day United States and Dominican Republic to the 17th century and back again as Chatterton and Mattera seek to solve the mystery of where lies the wreck of the Golden Fleece, a pirate ship captained by the enigmatic Joseph Bannister.

Coming in at just under 250 pages, Pirate Hunters

is a quick read (the author read it in a day of air travel), but covers a great deal of ground and introduces the reader to such legends within the Florida wreck diving community as Bob Marx. Readers will be amused and enthralled at the colorful stories of Chatterton and Mattera’s efforts in the Dominican Republic, stories which typify the rough and tumble life just a few hours flying time from US shores.

A minor quibble with Kurson’s writing is that he devotes a significant amount of the short work to the life stories of Chatterton and Mattera. While this fleshes them out as real life men, the amount of pages devoted to their back stories detracts from their groundbreaking work in the Dominican Republic and the story of the sinking and salvage of the Golden Fleece. Overall, though, Pirate Hunters is a great book to enjoy as one soaks in the last few days of summer.

A post written by the author for another website didn’t include an illustration of his great-grandfather, Ernest Kronenfeld, who served in the Great War.

In early 1862, the ladies of Savannah, Georgia came together to raise funds to partially pay for the construction of an ironclad to defend their native city. Dubbed the “Ladies’ Ram,” the vessel was launched on May 20, 1862 and commissioned as the CSS Georgia in July 1862. Like many of the Confederate Navy’s other ironclad vessels, the Georgia suffered from weak engines which kept her from making any serious effort to sally forth and break the Union blockade of her home port. Instead, the vessel was utilized as a floating battery and moored in a location where she could be warped so as to bring either broadside to bear on attacking vessels. Her career ended suddenly on December 20, 1864 as General Sherman’s March to the Sea brought him ever nearer Savannah.

Although partially salvaged for her armor of iron rails, the Georgia remained at the bottom of the Savannah River perilously close to the main shipping lane. Rediscovered in 1969, the vessel is now about to undergo a final salvage effort by the US Navy’s Mobile Diving Salvage Unit 2. The removal of the ship is necessary to complete a $703 million channel dredging project to enlarge Savannah’s shipping capacity. The unit will work from June 1 to July 20 to remove the ship’s armor, steam engine, superstructure components and arms and armaments. Following their salvage, the items will undergo conservation at the US Naval History and Heritage Command’s Conservation Research Laboratory in College Station, TX.

Dredging Up Hong Kong’s Colonial Past

HMS Tamar before her conversion to a floating depot ship

According to a report by the South China Morning Post, the remains of the HMS Tamar may have been discovered in the midst of the Wan Chai Development project in Hong Kong’s Victoria Harbour. If the vessel is indeed the Tamar, then its re-discovery dredges up a chapter in Hong Kong’s history that most of the cast of characters involved would prefer remain silent. Built in 1863 (some sources state she was launched in 1865), the Tamar was named for the Cornish river Tamar in southwest England and was the fifth vessel to carry the name.

Tamar arrived in Hong Kong on April 11, 1897 as a transport vessel and was transitioned to a floating office and depot ship. For the next forty-four years she served in this capacity until Hong Kong was threatened with Japanese invasion in December 1941. On the night of December 11/12th, the Tamar was towed out to deep water and scuttled, however, due to her enlarged superstructure, the vessel did not sink immediately and shore artillery had to finish the job. Thirty-five of the two hundred fifty ship’s company of sailors and Royal Marines perished in the next two weeks as the British fought against long odds to hold off the Japanese invasion force.

Following the liberation of Hong Kong in 1945, the wreck was removed so as not to be a hazard to navigation and the Royal Navy’s shore station was renamed HMS Tamar in 1947. Despite the salvage effort, it is likely elements of the ship’s keel and lower decks were left in the mud of Victoria Harbour. This is most likely what was rediscovered by the Wan Chai Development crews and how the vessel is treated is an open question perhaps many would rather not have asked. The scuttling of the Tamar is a reminder to Britain of her embarrassing defeat in Asia during World War Two – the loss of Singapore, Hong Kong and HMS Prince of Wales and HMS Repulse to the Japanese severely undermined Britain’s primacy in Asia. It is also a reminder to the People’s Republic of the eight years of misery they endured at the hands of the Japanese as well as the ignominy of having certain ports colonized by foreign powers. Finally, it reminds Japan of a past it would at times rather forget.

is a phenomenal history of British engagement in the Mediterranean world from 1800 to the present. Holland takes the reader around the entire circumference of the Mediterranean from Gibraltar to Malta to the Ionian Islands to Cyprus to Suez and leaves the reader struck by the influence the United Kingdom exerted in places many could not even locate on a map. Instead of focusing explicitly on social, political, military, diplomatic or economic history, Blue-Water Empire masterfully weaves them all together to present a comprehensive account of Great Britain’s strategy (or lack thereof) in colonizing and policing the Mediterranean over the course of three centuries.

Perhaps the most interesting aspect of the book is how Great Britain’s actions in the Mediterranean continue to echo today. For example, Holland carefully analyzes the trajectory of Cyprus under British rule and the air fields retained by the United Kingdom after her political withdrawal from the island. Those same air fields at Akrotiri and Dhekelia have been used as staging grounds for any action against Syria in 2013 or 2014. Also addressed in the book is the perennial question of how best to deal with the flood of refugees that accompanies unrest in North Africa or the Middle/Near East. Not only has the Arab Spring resulted in the destabilization of the region, but it also has driven refugees to seek asylum in places like Malta and Italy. Tragically, many of those refugees have died en route as their vessels are overcroweded and unseaworthy and subsequently sink.

Overall, Blue-Water Empire will not only entertain the casual reader, but will also inform the curious as to some of the origins of today’s headlines.

Sinking of the King Farouk

and the snatching of Adolf Eichmann

from Argentina. Less well known, though, are the naval commandos of Shayetet 13 who scored their first major victory on October 22, 1948. As a cease-fire loomed between Israel and Egypt, the Israeli Navy identified an opportunity to destroy the flagship of the Egyptian Navy – the King Farouk. Built on the River Clyde in Great Britain the King Farouk had spent ten years as a passenger ship before being converted into a warship in 1936 for the Egyptian Navy.

Lacking the resources and time to build a traditional blue-water navy, the Israelis decided to create a small group of special forces capable of pinpoint attacks. This force, which later became Shayetet 13, procured explosive motorboats from the Italian Navy. The boats had been developed for Italy’s highly successful frogmen during World War Two and were an off-the-shelf solution to creating an Israeli navy from thin air. Designed to explode upon impact, the boats would be vectored to their target by commandos who would abandon ship just prior to detonation. After only a few months of training, the commandos were thrust onto center stage as the King Farouk and an Egyptian minesweeper sailed into waters where the ships were particularly vulnerable to attack.

After heated internal debate about whether or not to attack with the ceasefire agreement looming, the Israeli mother ship was ordered to a point where it could release the small craft. After a short sprint down the Gaza coastline, the Israeli assault boats began their attack on the King Farouk and the accompanying minesweeper. Both ships were successfully struck and within five minutes the King Farouk was lying on the bottom of the Mediterranean. Although not widely publicized at the time, the sinking of the King Farouk and crippling of her accompanying minesweeper put the Arab world on notice that the Israeli Navy was a force to be reckoned with. 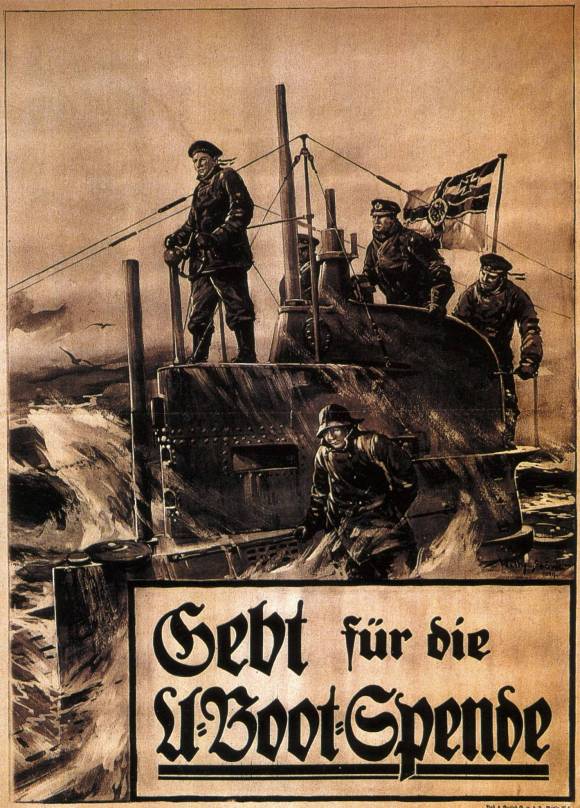 September 2, 1917 brought happy hunting to Commander Georg Schmidt and his crew aboard the U-28 as they came upon a convoy of helpless Allied merchantmen. Commander Schmidt navigated the U-28 among the Allied vessels and opened fire on the British steamer SS Olive Branch. All but one of the crew aboard the Olive Branch were able take to lifeboats and they immediately put as much distance as possible between themselves and their former ship. The crew knew something the doomed U-28 didn’t – that the Olive Branch was loaded to the gunwales with a load of highly volatile ammunition.

As more of the U-28’s shells found their mark, one struck the Olive Branch’s less than peaceful cargo and a spectacular explosion destroyed the Olive Branch and heavily damaged the U-28. Instead of extending an olive branch to the now shipwrecked German crew of the U-28, the convoy sailed on and all 39 hands aboard the U-28 were lost to the clutches of the Arctic Ocean.