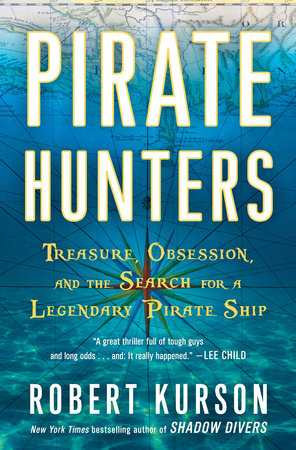 Robert Kurson is back again with another story of adventure, exploration and humanity with Pirate Hunters

. In Pirate Hunters, John Chatterton, one of the main characters of Kurson’s previous book Shadow Divers

, embarks on an expedition to locate and salvage the wreck of the Golden Fleece, a pirate ship lost in the 1600s off the coast of the Dominican Republic. Kurson blends the story of 17th century Captain Joseph Bannister, 21st century divers John Chatterton and John Mattera and the zany world of shipwreck hunters to create an exciting and engaging read. The book swiftly transports the reader from the shores of the present day United States and Dominican Republic to the 17th century and back again as Chatterton and Mattera seek to solve the mystery of where lies the wreck of the Golden Fleece, a pirate ship captained by the enigmatic Joseph Bannister.

Coming in at just under 250 pages, Pirate Hunters

is a quick read (the author read it in a day of air travel), but covers a great deal of ground and introduces the reader to such legends within the Florida wreck diving community as Bob Marx. Readers will be amused and enthralled at the colorful stories of Chatterton and Mattera’s efforts in the Dominican Republic, stories which typify the rough and tumble life just a few hours flying time from US shores.

A minor quibble with Kurson’s writing is that he devotes a significant amount of the short work to the life stories of Chatterton and Mattera. While this fleshes them out as real life men, the amount of pages devoted to their back stories detracts from their groundbreaking work in the Dominican Republic and the story of the sinking and salvage of the Golden Fleece. Overall, though, Pirate Hunters is a great book to enjoy as one soaks in the last few days of summer.