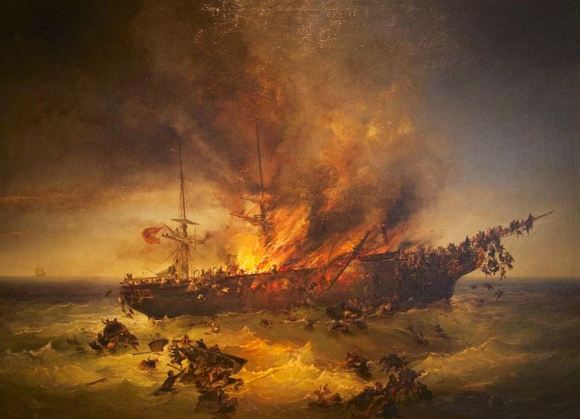 The 19th century witnessed a wave of emigration from Europe to the Americas and the creation of an entire industry focused on catering to the needs of European emigrants. The sailing of the SS Austria on September 1, 1858 should have been just another trans-Atlantic voyage, however, twelve days later one of the worst maritime disasters of the 19th century would strike the ship and her passengers and crew. Departing from Hamburg with 548 passengers and crew, the ship was only a year old and one of the most modern steam ships in the service of the Hamburg American Line.

Around noon on September 13, the crew began to fumigate the steerage passenger area. A handling mishap of the fumigation equipment by a member of the crew led to a mariner’s worst fear – fire aboard the vessel. The vessel was a veritable tinderbox between its wooden construction and highly varnished and flammable décor. The fire quickly spread throughout the Austria and when the helmsman abandoned the bridge, flames raced down the entire ship as the ship turned into the wind. With nowhere to go but the sea, the passengers and crew flung themselves to the mercy of the waves. Two vessels, the Maurice and Catarina picked up 65 survivors, but, sadly, the remainder of the 538 original passengers and crew perished.