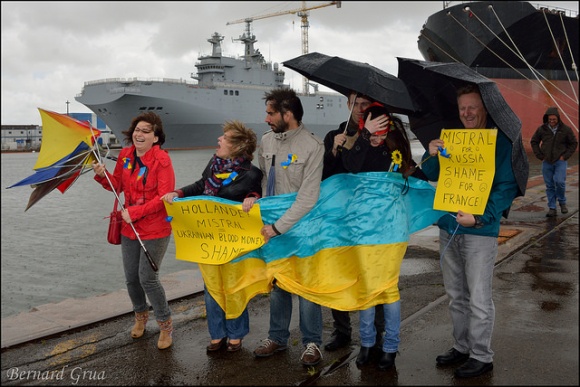 French officials announced today that the Vladivostok, one of two Mistral-class amphibious warships ordered by the Russian Navy, will not be delivered to the Russians as previously planned. The announcement is quite surprising as the French had insisted for several months that the ship would be delivered as planned despite protests from Ukraine, France’s NATO allies and other international actors. The decision is also surprising given France’s infatuation with supplying military and dual-use items to authoritarian regimes – i.e. the sale of a nuclear reactor to Saddam Hussein’s Iraq in the 1980s. This is the same France that prohibited the Middle East’s only functioning liberal democracy, Israel, from taking delivery of missile boats it had ordered

. The news comes only a days after rebels shelled and sank a Ukrainian coast guard vessel.

The Vladivostok is one of four contracted for by the Russian Navy and would be highly useful for power projection in a crisis such as that in Ukraine. As operated by the Russian Navy, the ship would most likely embark 16 attack helicopters such as the Ka-50/52 as well as 4 landing barges or 2 medium hovercraft. In short term operations, Mistral-class vessels can carry 700 troops and any combination of 60 wheeled armored vehicles, 46 vehicles plus 13 tanks or 40 T-90 tanks. A Russian task force with this kind of aerial, armored and over the horizon seaborne delivery ability would be a potent weapon deployed against an already depleted Ukrainian naval force.