At 10:30pm on February 16, 1941, U-101, captained by Korvetten-Kapitan Ernst Mengersen took up a firing position off the starboard midsection of a lone British freighter slowly making her way through heavy North Atlantic seas. Despite his first spread missing, Mengersen persisted with the attack and fired another torpedo which struck the freighter’s number two hold and caused a massive explosion to rip through the vessel. Less than 20 minutes later the ship slipped beneath the frigid waves of the North Atlantic. Unbeknownst to Mengersen or any of the crew of the U-101, the freighter they had sunk, the SS Gairsoppa, was laden with an incredibly valuable cargo of silver ingots bound from India to the United Kingdom.

Seventy years after the Gairsoppa sinking, an American company, Odyssey Marine Exploration, through a competitive bid was awarded the exclusive salvage contract by the UK government to recover the Gairsoppa’s silver cargo . The UK government’s Ministry of War Transport had paid out a war insurance claim on the silver during World War II and as a result was the legal owner of the silver. Under the contract, which followed standard commercial practices, Odyssey assumed the risk of search and recovery and retained 80% of the net salved value of Gairsoppa silver cargo. During 2012-2013 operations, Odyssey went to work discovering, mapping and recovering the Gairsoppa’s cargo. Over the course of two summers, Odyssey recovered more than 99% of the insured silver bars equaling more than 3.5 million ounces of silver. Although most of the silver was  sent to a UK refinery, investors and shipwreck enthusiasts can purchase 10oz silver ingots and 1/4oz silver Britannias struck by the Royal Mint from silver recovered from the Gairsoppa. 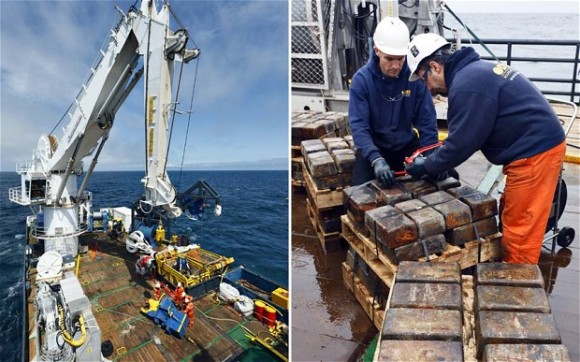