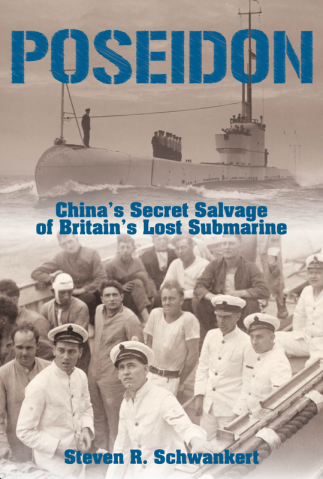 In his new book, Poseidon

, expat journalist and diver Steven Schwankert brings alive the unfortunate sinking and mysterious salvage of the Royal Navy submarine HMS Poseidon. Over the course of several years, Schwankert meticulously researched the history of the Poseidon via trips to UK archives, Chinese museums and libraries and even a dive on the wreck of her sister ship in the Ionian Sea. Schwankert’s research shows in the compelling manner in which he unfolds the story of the Poseidon, her crew and their fate, and the subsequent history of the vessel in the context of greater Chinese/world history.

The book especially shines in Schwankert’s dogged determination to get to the bottom of the story. His investigative efforts bear fruit in the later pages of the book as he brings to life the terrestrial surroundings of Poseidon’s sinking on Liu Gong Island. Readers will be engrossed by the dramatic escape of some of Poseidon’s trapped crew members and the mysterious disappearance of the wreck from the sea floor. Poseidon

helped make a trans-Pacific flight pass by in almost no time at all and is well worth the read. China history buffs, maritime historians, lovers of detective novels and any fan of Dirk Pitt will enjoy the tale told by Schwankert in Poseidon