Battle of the Nile 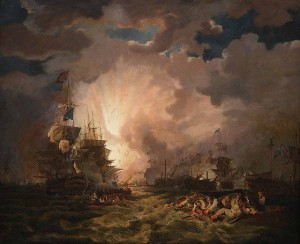 The boy stood on the burning deck

Whence all but he had fled;

The flame that lit the battle’s wreck

Shone round him o’er the dead.

Two hundred fifteen years ago today, Admiral Horatio Nelson pounced upon the French fleet in Aboukir Bay, Egypt. By early morning the next day, Nelson and his fleet had captured or destroyed nearly every French ship and ended Napoleon Bonaparte’s dreams of a French Egypt and the destruction of Britain’s colonial holdings in India. Alternatively called the Battle of the Nile or the Battle of Aboukir Bay, the action would later be immortalized in the poem Casabiana by Felicia Dorothea Hemans, the first stanza of which is above.

For two months in the summer of 1798, Nelson fruitlessly tracked the French fleet across the Mediterranean. Meanwhile, the French used the time to capture the island of Malta and land an army of troops and scholars in Egypt. Although the French troops eventually were defeated, the scholars scored a victory for the ages when they discovered the Rosetta Stone.

3 responses to Battle of the Nile