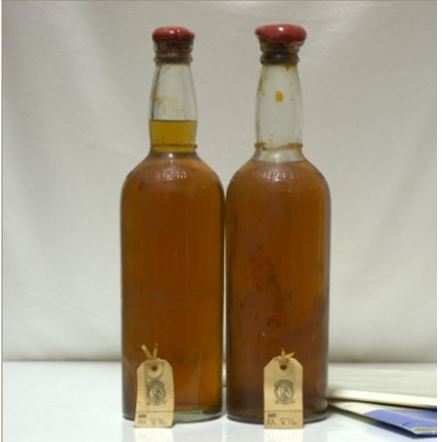 Today, two bottles of scotch from the wreck of the 8,000 ton SS Politician went up for auction on Scotch Whisky Auctions’ website. Politican departed Liverpool in February 1941 with a general cargo bound for Kingston, Jamaica and New Orleans. Stuffed within the ship’s holds were 28,000 case of malt whisky. While sailing around the Outer Hebrides, the Politician wrecked off the island of Eriska and the local islanders moved quickly to salvage the cargo and quench their war-deprived thirst.

Forty six years later, in 1987, professional diver Donald MacPhee discovered 8 bottles of whisky on the wreck which were subsequently auctioned by Christie’s for £4,000. As of this writing the winning bid for just 2 of the bottles at the Scotch Whisky Auctions site is £2,400 – a tidy profit for the previous owner.