On the morning of April 9, 1940, the quiet tranquillity of Narvik Fjord was shattered by the arrival of a flotilla of 10 Kriegsmarine destroyers with orders to capture the strategically significant port of Narvik. Despite only possessing the two obsolete coastal defence ships HNoMS Norge and HNoMS Eidsvold, Norwegian naval commander Odd Isaachsen Willoch refused to surrender and the fjord soon echoed with the sound of screaming shells and whooshing torpedoes. Unfortunately for the Norwegians, their outclassed ships were sunk in a battle lasting a mere 20 minutes with the loss of more than 300 sailors. The victorious Kriegsmarine force quickly took possession of the port and the multitude of ships riding at anchor in the harbor.

The next day, though, saw the arrival of a flotilla of Royal Navy destroyers. Among the flotilla was HMS Hotspur which unfortunately was not captained by Commander Hornblower

. Engaging the German force, the Royal Navy’s destroyers acquitted themselves well trading the loss of 2 destroyers and 1 heavily damaged for 2 German destroyers sunk, 4 damaged and 7 cargo vessels destroyed. Three days following this engagement, a Royal Navy task force consisting of the battleship HMS Warspite, 9 destroyers and aircraft from HMS Furious unleashed their fury on the remaining German destroyers. Running low on fuel and ammunition, the German flotilla was at the mercy of the British task force and all 8 destroyers along with 2 u-boats were sent to the bottom of Narvik Fjord. Despite their overwhelming victory, the Allies were unable to follow up for lack of ground forces and Narvik remained in German hands. 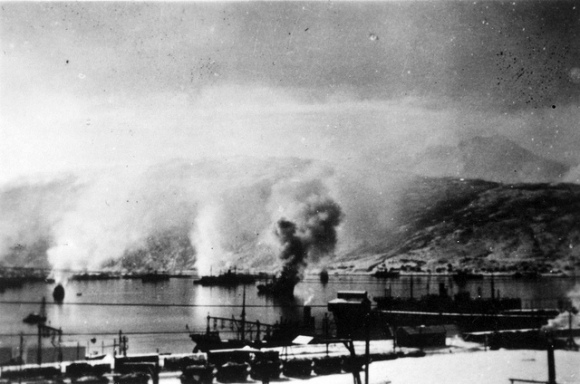