During the last three decades of the 19th century, various Western nations carved up not just Africa, and the Near and Far East, but also various Pacific islands. In many cases, the smaller European powers sought to do empire on the cheap by not governing the islands but encouraging the installation of puppet governments. Thus, the nation could merely secure resources and coaling stations for its naval fleet. In the case of the Samoan Islands in the late 1880s, the German Empire encouraged a civil war between several tribes in order to weaken the tribes’ hold on the island and secure German concessions. Recognizing the strategic importance of the islands, the British and Americans shipped military assistance to opponents of the tribes aligned with Germany. 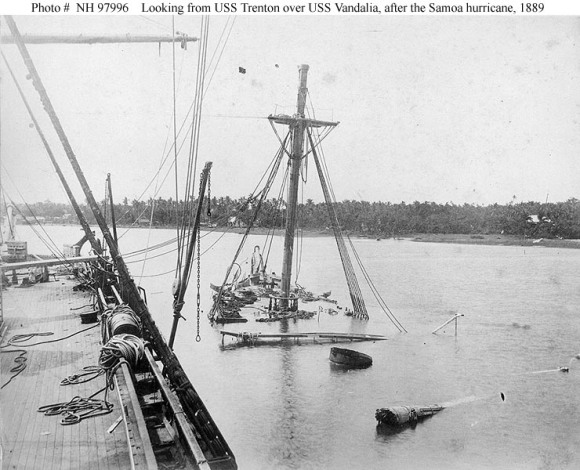 As the conflict escalated, each Western nation dispatched naval vessels to Samoa and the three nations confronted one another in Apia Harbor during 1889. Britain sought to remain a peaceful arbitrator while America and Germany faced each other with the threat of belligerent action. The need for negotiations or military action between the American and German vessels, though, was swept away by the March 15/16th Apia Cyclone. Unbeknownst to either side, a cyclone had been bearing down on Samoa as each side scowled at one another across the harbor. Samoans awoke on the morning of the 16th to discover both the American and the German squadrons beached, sunk or wrecked in the harbor. The loss of the naval squadrons effectively defused the situation and the dispute was resolved by the Tripartite Convention of 1889 by which Samoa was divided between America and Germany.