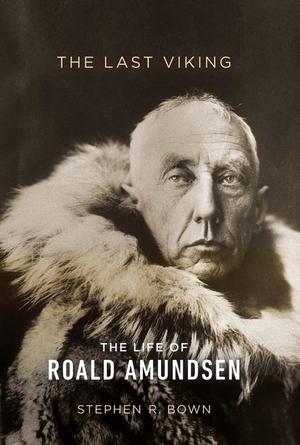 In his latest book, The Last Viking

, author Stephen Bown documents the epic life of Norwegian explorer Roald Amundsen. Amundsen is best known for winning a dramatic race to the South Pole and becoming the first human to reach the bottom of the world. Bown presents readers with a modern retelling of Amundsen’s life and stunning achievements. Amundsen was not only the first to journey to the South Pole, he also was the first to reach the North Pole and to sail the Northwest Passage.

Divided into five parts, The Last Viking chronicles each of Amundsen’s polar explorations including his last ill-fated voyage to rescue the stranded crew of an Italian airship in the Arctic. Bown, though, resists the urge to focus solely on Amundsen’s explorations and presents readers with a portrait of a confident leader whose drive and attention to detail helped him become one of the most successful explorers of the 20th century.

Utilizing contemporary newspaper accounts and previously untapped archival materials, Bown describes in detail Amundsen’s voyages, personal financial problems and character flaws. The reader also learns of the behind the scenes struggles Amundsen endured with duplicitous agents, rival explorers driven by nationalism, and the cataclysm of World War I which hampered one of his voyages.

Each section of the book opens with a map of the region corresponding to the exploits Bown documents in that section. This is especially helpful to understand the vast distances Amundsen covered either by ship, sled, skis, airship or plane.

In a world where little is left to explore, Bown transports his readers to a time when great men battled nature to explore the earth’s last remaining terra incognita. As the winter months approach, readers would be well served to buy The Last Viking and curl up in front of a roaring fire to enjoy Bown’s gripping account of Amundsen’s epic polar adventures.