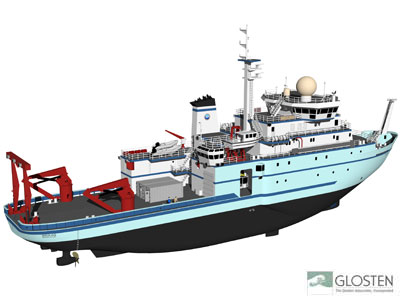 Yesterday, Marinette Marine launched the arctic research vessel Sikuliaq which will enter service with the University of Alaska Fairbanks in 2014. Sikuliaq, which means young sea ice in Inupiaq, will replace the 40 year old R/V Alpha Helix. The $140 million ship is not only newer, but also is more capable than Alpha Helix. Being designed specifically for arctic use, the ship is capable of cutting through ice up to 3 feet thick and can house 26 scientists for up to 60 days at a time. With the increase in commercial use of the polar regions, the ship will be put to good use studying the geology of the arctic, its fisheries and changes in ice levels. One of Inupiaq‘s designers was also responsible for the new Neil Armstrong research vessel class for the US Navy. The University of Alaska Fairbanks plans for the ship to be deployed on oceanographic expeditions for 270 days out of the year.