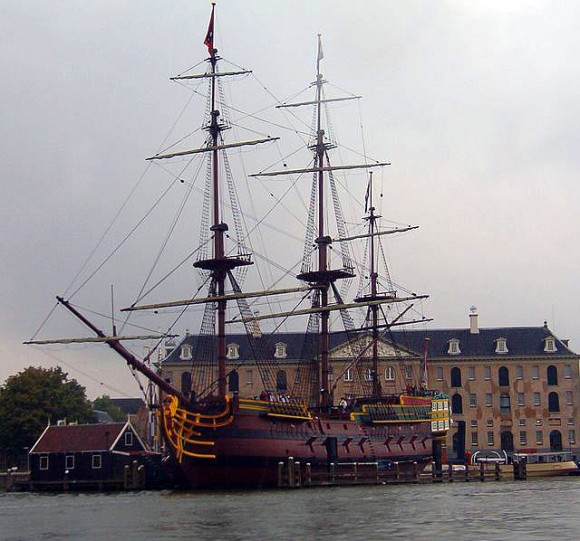 Australian shipwreck diver Hugh Edwards believes he has located the wreck of the 18th century Dutch East Indiaman Aagtekerke in waters off the Abrolhos Islands in Western Australia. Lost in 1726, the Aagtekerke was en route from Africa to Batavia in the Dutch East Indies (now Jakarta, Indonesia). This isn’t the first wreck Edwards has discovered in his 50+ year diving career. In 1963, Edwards located the Dutch East Indiaman Batavia which had wrecked on its maiden voyage in 1629. Over a period of four years from 1970 – 1974, marine archaeologists worked to recover and preserve artifacts from the Batavia and they are now housed in the Western Australia Museum in Perth. The author intends to make a site visit to the museum in the near future and will post his findings when he does so. Additionally, a replica of the Batavia serves as a museum ship in Leylstad, Netherlands.

In the same year Edwards found the Batavia, he located another Dutch East Indiaman, the Zeewyck, which had sunk in 1727. In subsequent trips to the wreck site Edwards discovered several artifacts including an elephant tusk that didn’t coincide with the historical record for the Zeewyck. After nearly 50 years of piecing together various clues, Edwards has come to the conclusion that the Zeewyck and the Aagtekerke sank within 300 meters of one another and their debris field intermixed. Translated journal entries from survivors of the Zeewyck indicate that they had come across debris from another shipwreck when their own ship sank and the presence of the elephant tusk (the Aagtekerke was carrying 214 tusks and the Zeewyck none) seem to confirm his thesis.

Edwards is continuing to explore the site and is hoping to locate the ~30,000 silver coins believed to be among the Aagtekerke’s cargo. Under Australian law, any artifacts raised from the site would belong to the Australian government, however, under generally recognized principles of admiralty/salvage law, Edwards might be entitled to a salvage award for any artifacts he recovers.